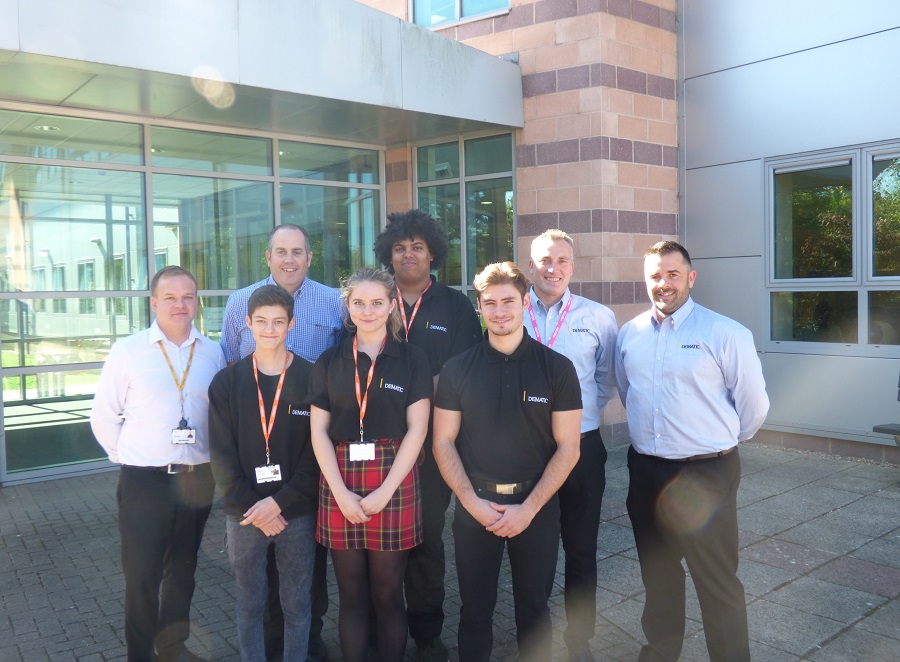 Two of the apprentices, Eve Smith and Tyler Manley, applied for their apprenticeships with Dematic following an open-day for students from North Oxfordshire Academy held at Dematic’s Adderbury offices back in March – whereas, Keaton Church and Brendan Visagie applied through the Government’s Apprenticeships Portal.

After a first year spent in academic studies at Warwick Trident College, the following three years of the course will be work-based with day-release. Throughout the process the apprentices will gain a rich understanding of the business by working across most departments within Dematic Northern Europe’s offices in Adderbury and on customer sites.

Darren Smith, Technical Trainer and NVQ Centre Manager, heading up the engineering apprenticeship programme at Dematic, says: “The engineering skills shortage is a very real issue today and that is why Dematic is investing in its apprenticeships programme to develop new talent for the future. As an engineer that has come through the apprenticeship route, I can see the many advantages and huge value in developing home-grown talent. We have developed partnerships with local schools, such as with North Oxfordshire Academy, to tap into local talent at an early age and to offer those young people a tremendous opportunity in an exciting and dynamic industry.”

Making an early comment, Tyler Manley, Dematic Apprentice – Controls Engineering Design, says: “The whole Dematic experience has been incredible so far. I feel really welcome as an employee and I have enjoyed being shown around and being taught about what the job role entails. College has been very enjoyable, so far, as we have been very hands-on. All in all, the whole Dematic experience has been exciting and I’m really glad I got the apprenticeship.”

Also commenting, Keaton Church, Dematic Apprentice – Controls Engineering Design, says: “When I first started looking for apprenticeships, I was looking for a role that would allow me to utilise the skills that I already had from my past experience learning and working in the Motorsport industry. The Dematic apprenticeship seemed like the perfect fit, allowing me to use a lot of the skills I had already learnt, as well as gaining a wealth of new experience and knowledge on the apprenticeship side. Having now been at Warwick College for just over a month, I find myself enjoying learning new things all over again.”

Will Harris, Head of Department for Work Based Learning – Engineering Apprenticeships – at Warwick Trident College, welcomes the close collaboration with Dematic: “We are delighted to be working with Dematic on developing the next generation of Engineers. The four new Dematic apprentices are settling in well to life at WCG, as part of this year’s cohort of 70 engineering apprentices across the WCG campuses. The students have made a good start on their Foundation Competencies; a collection of practical tasks that help build the core foundation skills and behaviours that are fundamental to supporting their career development.”

Brian Hendry, Senior Engineering Director, Dematic Northern Europe, says: “Young people are the future of our industry. As a business deeply rooted in developing advanced automated technologies, we are keen to invest in the next generation of Design Engineers and to demonstrate to young individuals, many of whom may be local to our Oxfordshire offices, that there are huge opportunities to be gained through taking an engineering apprenticeship. We want to forge strong partnerships with local schools, so that talented young people can build a bright future at Dematic.”

Dematic now has three cohorts of apprentices at different stages. The other two groups are working to complete Maintenance Engineering Apprenticeships, focused on developing the skills needed by resident maintenance engineers.