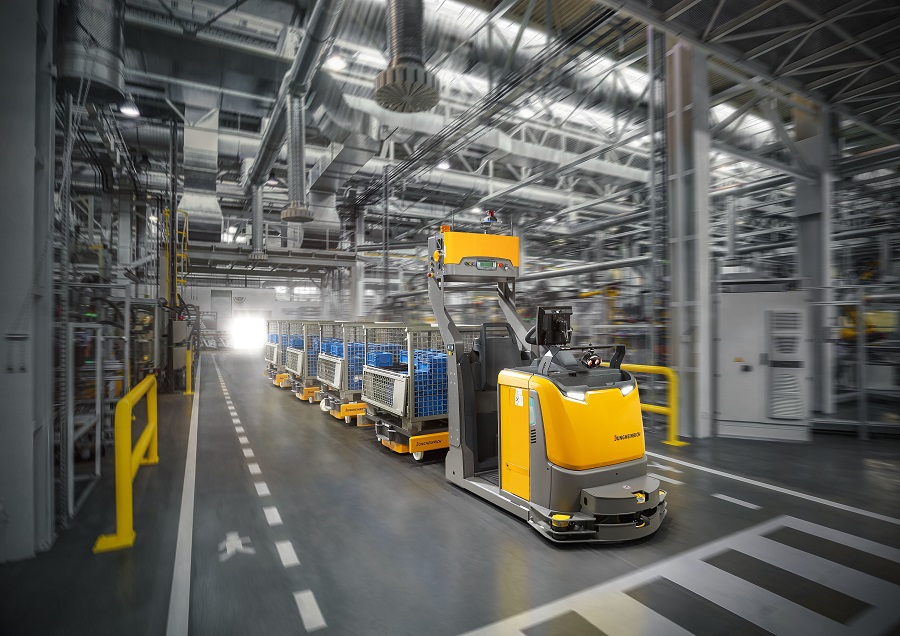 Jungheinrich is automating the material supply for Audi’s engine production in Györ, Hungary. Six EZS 350a driverless tow tractors are being used for this purpose. Along their 1,000-metre-long route, the automated tugger trains are serving 57 stops, thus enabling efficient and reliable transport.

Audi Hungaria develops and produces drive technology for Audi AG and other VW Group brands in Györ, Hungary. Since its foundation in 1993, more than 39 million engines have been produced at the plant. Now, with the help of intralogistics specialist Jungheinrich, the car manufacturer has automated the previously manual material supply for its engine assembly.

Jungheinrich’s automation solution relies on the use of six automated guided vehicles based on the tried-and-tested Jungheinrich EZS 350 electric tow tractor. Equipped with modern navigation technology and safety components, the tow tractors are used to automate routine transports in engine production reliably and safely. Along a 1,000-metre-long route, the tow trains drive to a total of 57 stops in different areas of the production floor – 50 of which are along the assembly line. The automated tow trains are to be used in mixed operation with manual industrial trucks in three shifts, seven days a week.

With each trip, an EZS 350a can transport up to 5,000 kg of different parts for the assembly of four-cylinder petrol engines. Different trailer variants are used for this purpose. They are loaded manually with full loads at three stations. Afterwards, the tow trains drive independently through the assembly area and are unloaded at the various stops. On their way back, they transport empties from production back to the logistics area.

“Audi Hungaria is the largest drive production plant in the world and the central drive supplier for many brands of the Volkswagen Group. That is why we are always required to use the latest technologies and are constantly working on efficiency improvements and process optimisations. At our site, we promote both ‘smart’ production and ‘smart’ logistics. In this context, the automation of our logistics processes is an important step that contributes to increasing our competitiveness through greater efficiency,” says Robert Buttenhauser, Board Member for Production Drives at Audi Hungaria.

The integration is implemented as a stand-alone system with a special tow train app and a graphic user interface for timetable management. Driving orders are assigned via the Jungheinrich Logistics Interface, which records the barcodes of the tow train trailers by integrating hand-held scanners. The system is integrated into the Audi system landscape via the Audi Traffic Control Interface, which is used to control external peripherals such as traffic lights and fire protection gates.

During development, Jungheinrich designed the system in such a way that the EZS 350a can be easily integrated into each customer’s existing IT and network landscape. For example, the existing WLAN structure can be used for communication with the trucks. If an existing host system, such as the Jungheinrich WMS or another WMS/ERP system, is to be used, the automated guided vehicle can connect to this system via the Jungheinrich Logistics Interface.

Generally, no groundwork is necessary for the navigation of the EZS 350a as the truck orients itself by means of laser navigation. For this purpose, reflectors are attached to suitable objects along the route, such as racking, columns and walls, or natural landmarks. This makes it possible to position the vehicles on the predefined stations with millimetre precision.

The EZS 350a is driven by a 24-V traction motor using three-phase current technology and the motor is completely maintenance-free and particularly energy-efficient. Additionally, the EZS 350a is available with modern lithium-ion technology, which guarantees fast charging times, freedom from maintenance and a long service life.

Steve Richmond, Director of Logistics Systems, Jungheinrich UK comments: “The commissioning of this innovative automation solution took place during ongoing production operations, which added a level of complexity to the deployment. But, with both companies’ shared visions focused on improved efficiency, productivity and process optimisation through smart production and logistics, the integration has been a resounding and seamless success.”