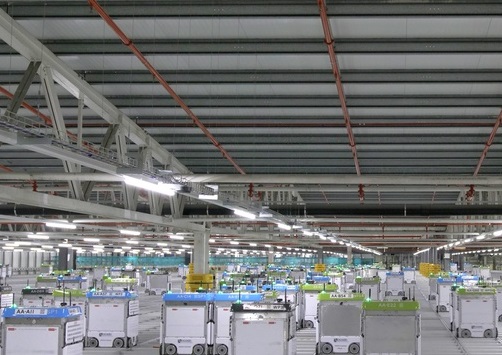 Kroger has selected a site in Monroe, Ohio, a suburb of Cincinnati, for its first Ocado customer fulfillment center, according to a company press release. The center, also known as a “shed,” will be an automated warehouse facility with robotic and digital capabilities for food storage and retrieval.

The first shed will be about 335,000 square feet and will create more than 400 new jobs. Kroger is investing $55 million to build the shed, with plans to open 20 more throughout the U.S. to provide a seamless grocery shopping experience for customers.

According to reports, Kroger and Ocado will announce three other sites by the end of this year.

Kroger made headlines in May when it exclusively partnered with Ocado for automated fulfillment capabilities in the U.S. This latest announcement is the next step in that partnership, which was solidified in October with a master services agreement.

According to the press release, Kroger expects to receive state and local incentives to construct the shed. Kroger already has strong partnerships with local government and economic organizations and is viewed as an innovator in the region. Opening the shed close to Kroger’s headquarters will generate wide-ranging support among business and government stakeholders and will also result in broader awareness among local customers given – which may lead to more e-commerce adoption.

Another major advantage in building the first Ocado fulfillment center in the region is that there’s not extensive e-commerce competition on this scale at this point. Kroger is among the first grocers to invest so heavily in robotics and digital technology, and it positions the company as a tech leader as well as a grocery visionary.

That said, Walmart has a heavy presence throughout southern Ohio and down into Kentucky. Other major grocery delivery players in the Cincinnati area include Shipt, Instacart and Amazon Prime Now.

Kroger did not release details regarding the timeline of constructing the first shed, but Forbes reported last year that Ocado fulfillment centers can take as long as three to four years to build, given the technology requirements, temperature controls, robotic capabilities and all the associated costs. It is not clear whether Kroger’s first fulfillment center will require that much time, or if it has the investment power to accelerate an otherwise lengthy process.

Automation on this scale is promising for the growth of Kroger’s online business, giving it the capabilities it needs for both online grocery delivery and order pickup. On a conference call earlier this year, McMullen said that one goal with Ocado sites is to take the pressure of online fulfillment off of Kroger store locations. The expectation is that e-commerce fulfillment will become cheaper, faster, more reliable and more seamless for customers so that it is an easy alternative to dropping by the grocery store.

Building more Ocado fulfillment centers is going to be extremely expensive and will require ongoing investment from Kroger, so the payoff is going to have to be high. The big unknown is whether or not enough customers will rely on e-commerce to make Ocado site operations worthwhile.

As more of these sheds are announced and eventually built, Kroger will be at the forefront of the digital grocery landscape and, whether the effort is successful or not, the company will be an important case study for other grocers to follow.