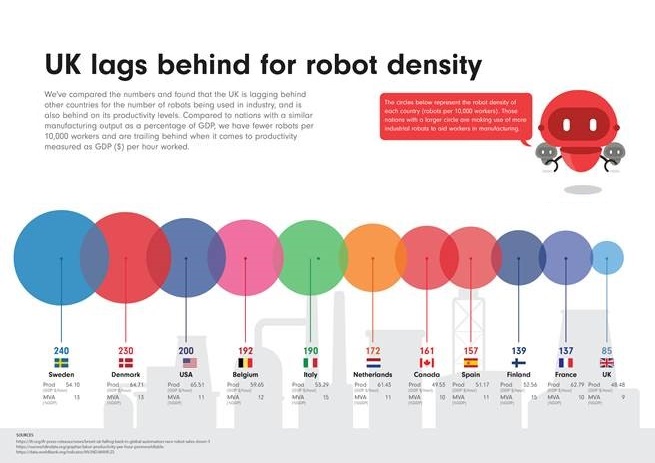 Supply chain specialists, Balloon One, have conducted some new research looking into why the UK is lagging behind in its use of industrial robots, and how its national productivity is suffering as a result.

Compared to nations with a similar manufacturing output, the UK is using fewer robots in industry and aren’t able to achieve the same productivity levels.

To gain this insight, Balloon One looked at:

To see if there really was a link between having a greater robot density and having a more productive industry, they looked at data from the nations with the most robots from across the globe to see how productive they were and how much they relied on manufacturing as a percentage of their GDP.

The main graphic (above) shows the UK compared to ten other nations that have similar levels of manufacturing. Not only are we using fewer robots, but we are lagging behind in terms of our productivity levels, arguably as a result of having lower levels of automation.

Ultimately the UK is ranked 20th most productive country in the world: 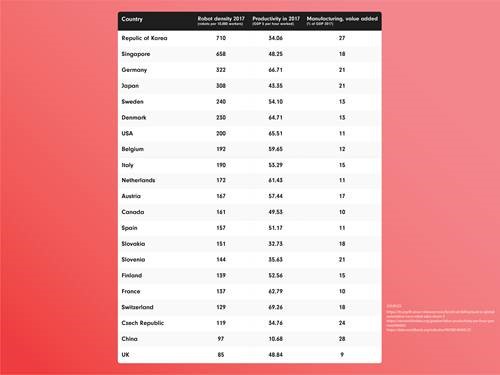 Balloon One found that:

“This analysis shows that countries with a robot density of 150 or more are, on average, experiencing higher productivity levels than those with a robot density of 149 or less. While it could be argued that this is a result of some nations being more focused on manufacturing as part of their economy, and therefore having developed better infrastructure to meet demand, higher levels of productivity aren’t skewed towards nations that rely more heavily on manufacturing. In fact, manufacturing levels are, on average, higher (17.86% of GDP) in less-robot-dense nations.

“Because there is a correlation between robot density and higher levels of productivity, it seems that if the UK increased its robot density, it could boost productivity. This begs the question of whether the country should invest more in automation if it wants to see a boost in its manufacturing productivity. It certainly seems to be working for nations of a similar standing.

“While industrial robots certainly seem to offer a huge productivity boost on a national level, there is also potential for other types of automation to further increase these numbers. A good example of this are the robots found elsewhere in the supply chain, where they work alongside human workers to elevate efficiency. At Balloon One, we’ve seen first-hand how autonomous mobile robots (AMR) are capable of moving stock between stages of picking and packing by themselves, allowing staff to focus on more complicated tasks or to move onto the next job. There really is potential up and down the supply chain to enhance productivity with robotics.”

Balloon One have also created an interactive heat map to demonstrate robot density across the globe: