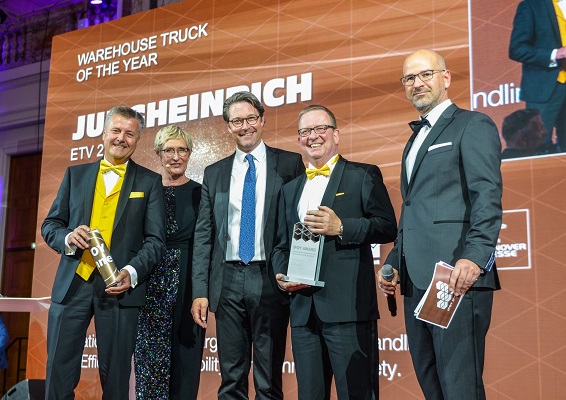 Jungheinrich’s ETV 216i, the first reach truck in the world with standard built-in lithium-ion battery, received the IFOY Award in Vienna on Friday evening. Federal Transport Minister, Andreas Scheuer, presented the award to Jungheinrich Board Member for Sales, Christian Erlach, at the Hofburg in Vienna.

The jury’s decision was based on the “outstanding customer benefit” of the ETV 216i. In its reasoning, the jury emphasised that the integration of a custom-made lithium-ion battery would herald a new generation of vehicles.

Thanks to the built-in lithium-ion battery, the vehicle has a particularly compact design and thus offers greater agility in storage. The ETV 216i gives drivers much more freedom of movement and a better all-round view. This makes it particularly user-friendly and helps improve safety in the warehouse.

The ETV 216i also achieves a significant increase in warehouse productivity compared to conventional reach trucks. By using an additional cast counterweight, Jungheinrich has succeeded in shifting the truck’s centre of gravity to a more favourable position further back. This also enables performance to be increased. The ETV 216i can thus lift a nominal load of 1.6 tons up to nine metres – 230 kilograms more than comparable vehicles, whereby the lifting speed with load is increased by 23 per cent.