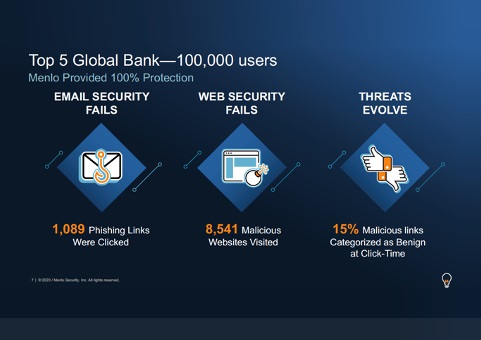 Menlo Security, a leader in cloud security, today announced an industry first by extending its cloud-based Secure Web Gateway (SWG) to include web isolation for mobile devices. This new offering is designed to eliminate the threat of malware and phishing attacks when users are accessing the internet and email from their smartphones and tablets.

Mobile device usage continues to grow in the enterprise and the security risk has increased accordingly:

Because mobile devices make it difficult to identify the tell-tale signs of a malicious email or link, Menlo Security developed a mobile security solution that can protect work wherever it happens, regardless of device or location, while securing remote employees accessing the web using home networks.

The new mobile isolation offering provides the same benefits of Menlo Security’s traditional isolation solution for desktop computers, including Data Loss Prevention (DLP), read-only phishing protection, and download controls. Additionally, all links sent in mobile applications will be opened in the default browser where there are read-only protections.

The Menlo Security Global Cloud Proxy Platform is built on an Isolation Core™, which separates the enterprise network from the public web while providing users with secure, low-latency connections to the Internet and SaaS applications. Updates that incorporate threat intelligence from sources such as MAPP are available to customers automatically, with no downloads or installation of software required. The platform is built in the cloud for the cloud and is architected to help companies embrace a cloud-first architecture. Unlike security products that deliver “almost safe” security, we believe the Menlo Security Isolation Core™ stops malware 100 per cent of the time, a feat that was previously thought to be unachievable.

“Mobile devices and browsers are an enticing target for cyber attackers looking to exploit zero days and conduct socially-engineered phishing attacks, yet in many organisations, mobile security is treated like a second-class citizen,” said Nick Edwards, Menlo Security’s vice president of product management. “At Menlo Security, we’re committed to securing work where it happens, and our mobile isolation capability extends the same protection for the PC to smartphones and tablets, securing today’s modern workforce.”