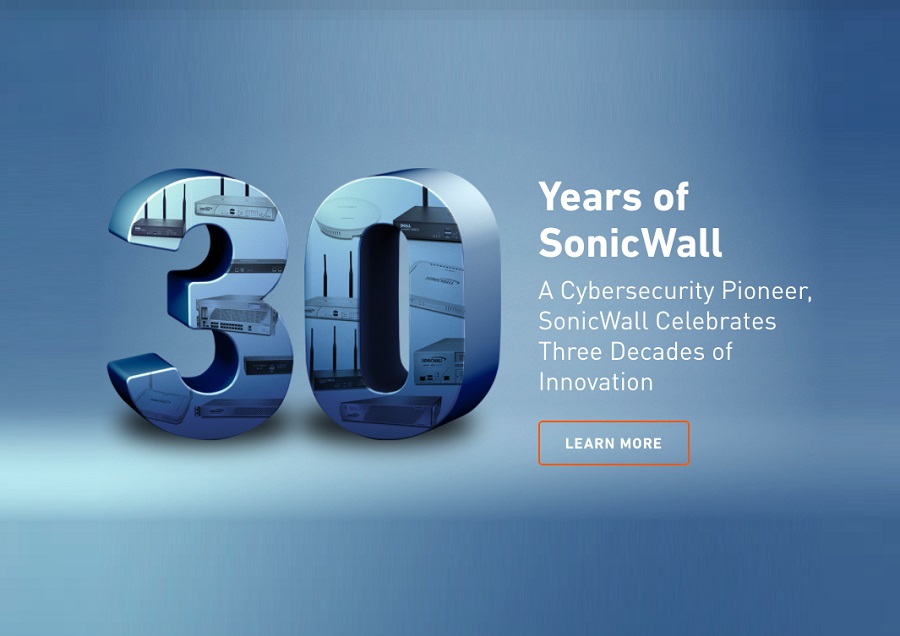 SonicWall today announces its 30th anniversary as a cybersecurity industry leader. Throughout August, the company will celebrate its heritage, product innovation, channel DNA and the many cybersecurity innovators who have helped support and transform it into the SonicWall it is today.

“Innovation and adaptability are key components to successfully evolving cybersecurity strategy through the ebb and flow of the fast-moving threat landscape,” said SonicWall President and CEO Bill Conner. “SonicWall has proven across three decades that its mission is securing the long-term success of its customers, partners and employees. While the last five years were important chapters in this journey, we have more goals to achieve, milestones to mark and history to be made. SonicWall is always forward-looking. And that’s how the company — and its people — has been a mainstay in the industry for more than 30 years.”

To commemorate this milestone achievement, the company will honor long-term employees and celebrate those who have deep tenure. Throughout the month of August, SonicWall will feature pictures from the company, people, products, partners and customers over the course of three decades via the #SonicWall30 social media campaign. Throwback Thursdays will be reserved for contests and stories depicting SonicWall’s past and future.

Founded in 1991 by brothers Sreekanth and Sudhakar Ravi as Sonic Systems, a provider of networking solutions for Apple computers, the company’s focus was to provide organizations of all sizes with firewall technology that was as affordable as it was effective. The first security appliance for small- to mid-sized businesses (SMB) — the Interpol –— was released in October 1997 and shortly thereafter renamed ‘SonicWALL’ in 1998. One year later, the company issued its initial public offering (IPO) and was rebranded SonicWALL.

After being held by private equity firm Thoma Bravo and sold to Dell in 2012, the company      rebranded as ‘SonicWall’ in 2016 and now resides as part of Francisco Partners’ portfolio.

SonicWall milestones at a glance

With roots planted firmly in the SMB market, the company’s growing customer base covers a vast range of industries, including education, healthcare, retail, infrastructure, federal government, state and local government, and more. Well known for its market-changing Boundless Cybersecurity vision, SonicWall now has more than 500,000 customers in 215 countries and territories.

“With cyber threats more prevalent and stronger than ever, it was imperative that we select a vendor that has been a consistent and driving force in navigating the threat landscape,” said Epicor IT Director of Hosting and Managed Services Harry Hartnup. “SonicWall’s innovative technology stays ahead of escalating threats while keeping pace with our evolving needs, helping us to scale, easily deploy and maintain visibility into growing networks.”

SonicWall, a 100% a channel company, relies on its expansive base of global partners to fuel its momentum and success. Today, the company has more than 17,000 channel partners worldwide and provides them with more training, tools and rewards than ever before.

“Our SonicWall journey started in 1996 and we have been retaining loyal partners who we’ve helped to scope, deliver, install and manage their customers’ security infrastructure ever since,” said Exertis UK and Europe Security Sales Director Jason Hill. “The relationships with the partner community stem right from the start and today we’re proud to still be working with the same fantastic partners whom without them, we wouldn’t be here today. This anniversary is a fantastic achievement all round and we sincerely look forward to the future of cybersecurity knowing we are backed by a vendor that puts security and education first.”

Through the award-winning SecureFirst partner program and SonicWall University, partners in every region have an opportunity to expand their education on today’s threat landscape, SonicWall offerings and earn accreditations that directly influence increased revenue attainment.

SonicWall’s product timeline moves at pace with the speed of technology developments. Just four years after its establishment, the company shipped its first internet appliance. By 2002, SonicWall had shipped 250,000 units and today has shipped more than 3.8 million appliances worldwide.

“It’s incredible to stop and look back over numerous and successful product generations, the creation of new business models and the development of technology that impacted this company and the industry,” said SonicWall SVP, Chief Technology Officer John Gmuender. “While our past is impressive, I look forward to what lies ahead.”