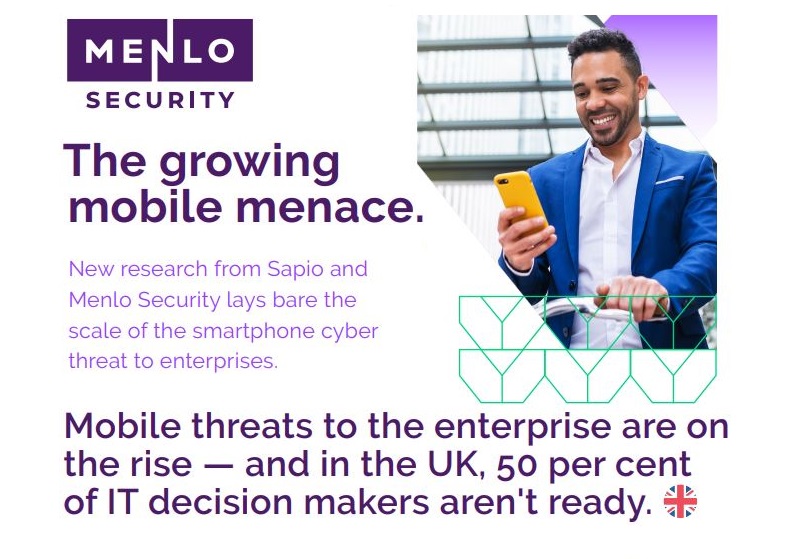 Menlo Security, a leader in cloud security, today released the findings from its “Menlo Security Mobile Risk 2021 Report”, which explores the security considerations and concerns around mobile usage as more businesses today operate remotely. Partnering with Sapio Research, the survey questioned respondents about the mobile security threat landscape and how businesses are responding to cybersecurity challenges during the global pandemic and beyond where work is no longer bound by physical offices.

Following a survey of more than 600 IT decision makers across the UK, US, and Australia, including CIOs and CISOs, Menlo Security discovered that over half of global respondents (53 per cent; UK: 50 per cent) admitted that it’s not possible to be prepared for all of the tactics and strategies used by attackers targeting mobile devices. More than a third (38 per cent; UK: 35 per cent) claimed that it’s impossible to keep up with the pace of these attacks.

The survey also found that three-quarters of IT decision makers believe their organisations are more vulnerable to mobile cyber attacks than ever before. It is of little surprise that 73 per cent of global respondents (UK: 67 per cent) believe that end users are now more susceptible to cyber attacks on mobile devices than they were five years ago. The survey also found that 76 per cent of respondents (UK: 76 per cent) believe they are more vulnerable to mobile attacks than just a year ago following the shift to remote and hybrid work environments.

“Although many organisations are confident in their ability to identify and prevent mobile attacks, often this is just overconfidence in legacy solutions that are not able to provide 100 per cent protection against the latest waves of socially engineered attacks, such as Phishing and Smishing or zero-days,” said Mark Guntrip, senior director of cybersecurity strategy for Menlo Security. “Even experienced professionals can fall victim to these attacks and the only way to truly prevent them in the first place is through isolation, which secures work regardless of where it happens.”

Global IT decision makers also acknowledged that 71 per cent (UK: 72 per cent) of them had experienced phishing attacks. Although a majority of respondents admitted they are either more susceptible to mobile attacks or they have already encountered one, a surprisingly high percentage still felt confident in the ability of their organisation to both identify and prevent them. Although mobile devices often make it difficult to identify the telltale signs of malicious emails or links, such as URL addresses, 88 per cent (UK: 86 per cent) still believe in their ability to identify them and 84 per cent (UK: 81 per cent) trust in their ability to prevent them.

“Threat actors are always looking for the path of least resistance and given the large number of organisations and employees who are still working remotely, mobile devices have entered into the centre of attackers’ crosshairs,” said Guntrip. “Unfortunately, mobile security has often been an afterthought for enterprise security strategies. Today’s businesses must rethink how they’re safeguarding their networks and what avenues are most susceptible to threats in the remote work landscape.”

The survey also inquired about the strategies that are most often used by organisations in the UK, US and Australia, finding that isolation adoption hovers around 40 per cent (UK: 36 per cent), lagging behind more traditional methods, such as mobile device management (84 per cent; UK: 78 per cent), and DLP (35 per cent; UK: 25 per cent), leaving a majority of organisations at risk of attack. Just 4 per cent globally had no solutions in place yet.

The survey was conducted among 617 IT decision makers from organisations with 1,000 or more employees across the US, UK and Australia. The interviews were conducted online by Sapio Research in April and May 2021 using an email invitation and an online survey.