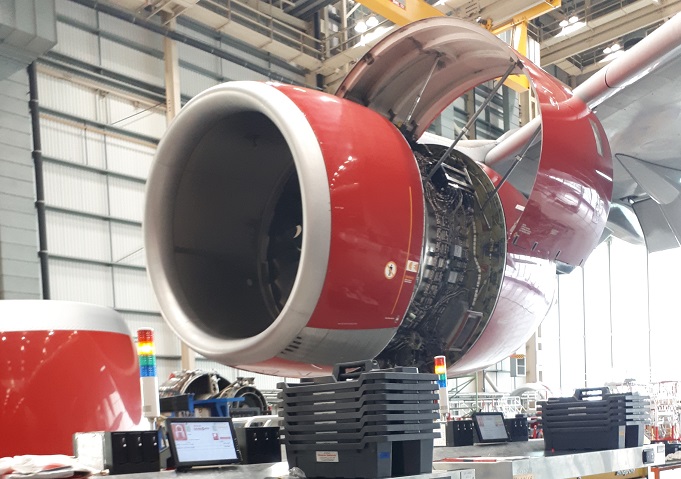 Historically, the management and control of tooling used in aircraft maintenance has been a manual process that was not always considered robust and with a view to satisfy recent guidelines by the EASA Virgin decided to automate the process as much as possible.

In a significant move to further heighten safe working practices and anticipate upcoming compliance measures, Virgin Atlantic Engineering recently took the decision to look for a technological solution for managing the issuing and return of tools used within its maintenance hangars and ramp areas. The airline, which operates in the UK at Heathrow, Gatwick and Manchester airports, approached its long-time partner on ground service equipment, Rushlift GSE, to help implement a fail-safe system for checking-out and receiving-back tools.

The airline had every confidence in its supplier’s ability to perform at the task. Rushlift GSE, part of the Doosan Industrial Vehicles UK, has been working alongside Virgin Atlantic Engineering for the last six years, ensuring the smooth running of the airline’s extensive fleet of ground service equipment through a highly successful leasing and maintenance agreement. As well trusted partners, and with the resources of the $21 billion global Doosan Group as a backup, Rushlift GSE was well placed to offer the airline a future-proofed solution for their tooling needs.

Their trust was rewarded. The result has been a radical shift in the ownership and control of the tooling and the levels of visibility and accountability available to the airline’s engineering management.

“Over the years, the industry has put in place a lot of processes and paperwork in this area,” says Andy Currey, Tooling & GSE Manager at Virgin Atlantic Engineering. “When an engineer signs out an aircraft under a Certificate for Serviceability they are taking full responsibility for ensuring that all tools used to maintain the aircraft are accounted for. That is a large responsibility for an engineer, especially when you consider that you could have twenty or thirty people working on an aircraft over anything from 24 hrs to several days, depending on the checks.”

Virgin Atlantic Engineering wanted a system that would automatically record and monitor the issuing of tools, logging each tool or kit to an individual engineer and then registering its return at the end of a shift – the idea being to modernise the process by moving away from manual paper based systems with individual engineers owning and using their own tools.

After extensive market research and an in-depth tendering process, the solution selected was from Snap-on, leased and maintained under a contract through Rushlift GSE. Of the 172 tool kits supplied across the airline’s three airport locations, 13 of them were Snap-on’s Automatic Tool Control (ATC) toolboxes, assigned for use in the hangars. The rest were mobile tool kits for maintenance activities in the ramp areas and were dedicated to various trades and trade specific tasks, such a mechanical, avionics and in-cabin technology.

With over 1000 tools in each ATC box the technology used to monitor contents needed to be highly sophisticated. As Andy Currey explained: “In the hangars the staff have a security pass with a bar code and this must be scanned before an ATC tool box can be opened. Critically, the system knows every item that is taken out and who has taken it out by date and time.

Visibility and accountability has been dramatically improved. “I can see on screen exactly what is happening with every single box, not only in the Heathrow hangar but also in the hangar at Gatwick,” says Andy Currey. “The system keeps me informed as to who has which spanner or pliers, when they took it, on which aircraft they are working and when it is returned”.

An important point for Virgin Atlantic Engineering was to take full control of the tooling, issuing tools and tool kits to individual engineers rather than having engineers using their own tools. However, providing the necessary equipment for some 350+ engineers across every trade would require a substantial £1m capital investment. The preferred approach taken by Virgin Atlantic was to lease the tools instead, thereby off-setting the risk of technological advances leaving them behind. If technology took a leap ahead sometime in the future, they could simply upgrade.

“We didn’t want to be caught out by changing technology, so leasing the equipment through Rushlift GSE, a partner we trusted and have been working with for over six years now, was clearly the best option,” says Andy Currey. “We lease our ground service equipment from Rushlift under a full maintenance contract and therefore, it was a straightforward task of adding to the contract.”

He concludes, “We’ve got a fantastic relationship with Rushlift GSE – and it works extremely well.”