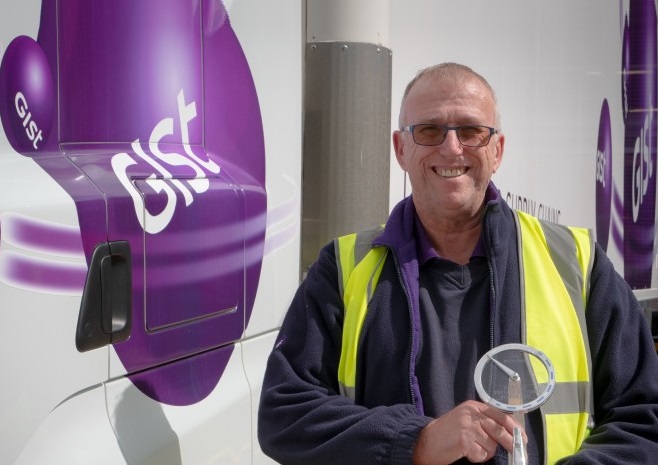 A driver from Gist has been hailed as a hero in the Microlise Driver of The Year Awards 2020.

The Microlise Driver of the Year HGV Hero Award recognises drivers who have gone above and beyond to respond safely, professionally and with great community spirit when faced with potential human tragedy on our roads.

John Bushby’s story is an inspiring one that featured on the BBC’s Caught On Camera programme. As a seasoned driver of forty-four years – with 26 years of service with Gist, all of John’s experience was called into play in March 2019 when he helped to avert a major catastrophe on the M1.

John was in the nearside lane immediately behind a European left-hand-drive lorry with cruise control set. Suddenly this trailer started reacting very violently and, at the same time, a large object came hurtling towards John from underneath the vehicle. John made a split-second decision.  He knew he couldn’t move to the left or to the right and braced himself for a collision while releasing and reapplying the brake to reduce impact.  After the crash, John immediately realised that the object that hit him was a car. He immediately called the emergency services, and waited until the passengers were freed.

Dash cam footage later revealed that the lorry in front of John started to pull out into the middle lane hitting a car which was in its blind spot, causing it to spin in front of the truck, along its nearside to then be crushed by the tractor unit.  Despite injuries, the couple driving the car have recovered thanks to John’s swift and controlled action. Most driver’s instinctive reaction would have been to turn sharply left or right when an incident such as this occurred but it is widely believed that John’s action of staying in lane and keeping his vehicle under control prevented many fatalities.

According to Chief Executive of Microlise Nadeem Raza, the independent judges found it inspiring to read stories such as this. “The Microlise Driver of the Year Awards highlight drivers who act with great courage and presence of mind when faced with challenges on the road. Our winner has clearly shown how lives can be saved through sheer bravery as well as through experience, knowledge and training.”