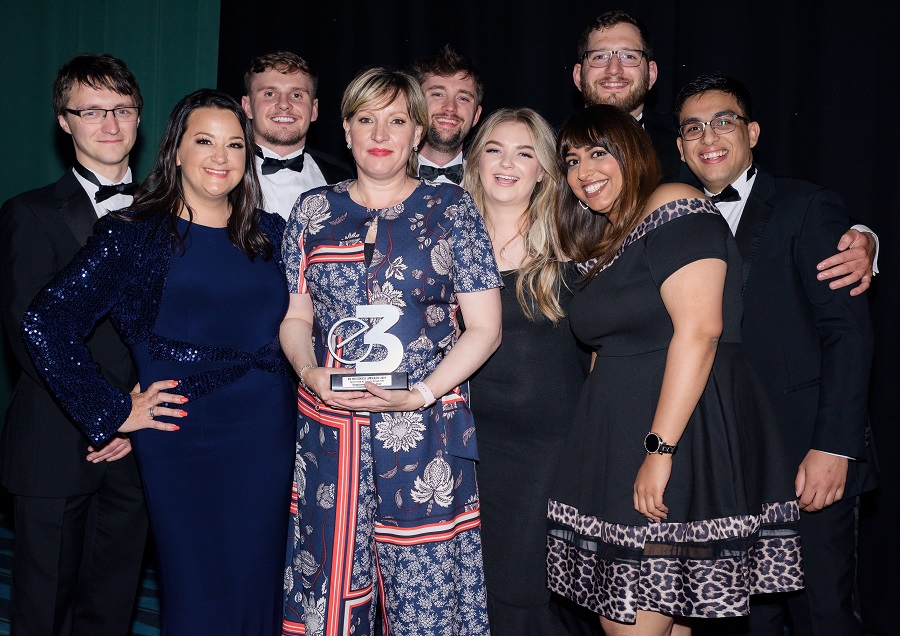 One of Lancashire’s top tech specialists is celebrating after scooping the coveted Employer of the Year Award at this year’s E3 Business Awards.

The company, based in Buckshaw Village, employs some of the country’s top specialists in bespoke software development and was announced the winners at a black tie event at the University of Bolton Stadium, following a rigorous judging process.

Carrie Nestor, head of operations at Magma said: “As a business supporting and nurturing our team of talent is at the heart of our ethos and we are absolutely delighted that this was recognised by the judges.  The team are dedicated and passionate about delivering the very best for our clients and this stems from the culture that we are so fiercely proud of; investing time and support in training and treating our team.”

Within this category the E3 Business awards were looking to applaud and honour a North West business that demonstrates an unrivalled commitment to their team from the top down, a company that not only upskills in training but also creates an environment that boosts morale, supporting individuals and teams with recognition in many ways.

Carrie added: “Since Magma was launched 20 years ago, one thing that has never wavered, is the support given to the team. This has evolved over the years to include the expected internal and external training and 121 CEO peer mentor support programmes, right through to more creative ways of motivating the team such as monthly massages, fully funded European socials, annual team building retreats, birthday’s off  and a star of the moment award, where anyone can nominate at any time to be in with a chance of receiving a £50 voucher of their choice.

“In a volatile industry it’s these touches and many more that have ensured we retain loyal staff that keep our average tenure of an employee to over four years against an industry average of just 18 months.  This has then of course made us more commercially successful with investment in staff being key to our business growth.”

Category sponsor and head judge, Danny Simpson MD of MID Communications said: “ Magma Digital won Employer of the year by being outstanding and fantastic in the interview with the panel. The way they articulated their business acumen and the desire for their people was simply overwhelming.

“A small to medium business Magma Digital stood head and shoulders above and performs exceptionally well against piers in its industry area, over indexing on many aspects. One thing was clear was the culture and ethos in Magma Digital is outlined and showed in its people and how they stand up to go above and beyond championing the business, their customers and each other.

“Through true evidence and demonstrations at the interview stage, it was clear to see.  Magma Digital was showcased as a fantastic business and an ambassador for change demonstrating the right ethos and mindset to all others.

“I would like to wish Magma Digital all the continued success for the future. Thank you, well done and good luck.”

The E3 Business Awards were held at the University of Bolton Stadium on Thursday, 11th July with host Danny Simpson, CEO of Mid Communications and over 300 guests and finalists were in attendance.

More information about the E3 Business Awards, including a full list of winners, can be found at www.e3businessawards.co.uk.