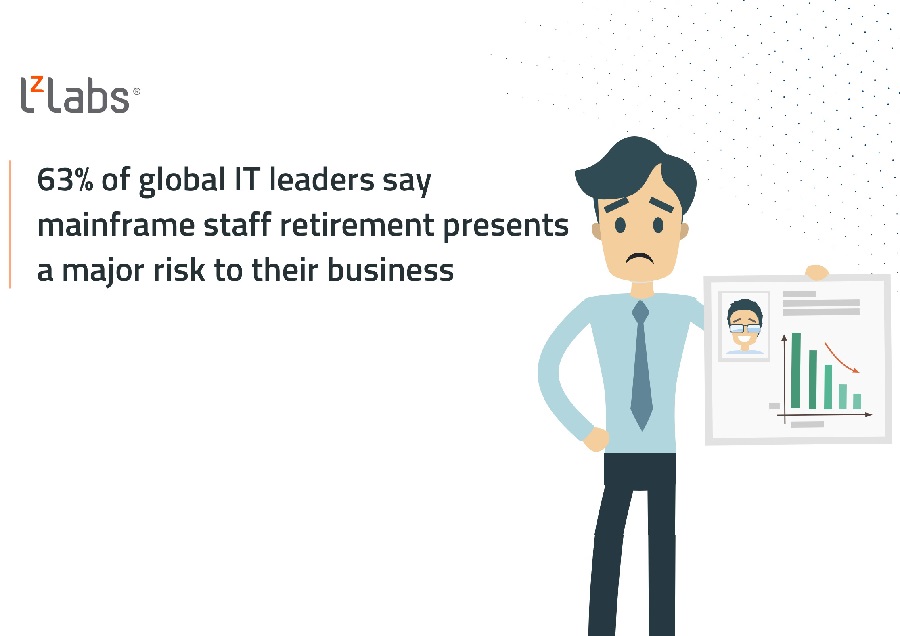 LzLabs today announced the results of its latest global survey, conducted by Vanson Bourne, which has revealed the extent of the skills crisis affecting businesses reliant on critical mainframe IT systems. Almost all respondents to the survey (99%) consider their organization’s mainframe applications as important or critical to business operations, yet a staggering proportion (93%) also expressed serious concerns about the mainframe environment itself.

The overriding source of concern regarded the impending skills crisis, as respondents are seeing the specialist mainframe skills required to keep these systems running rapidly disappearing from their organization. Of the top mainframe concerns reported by respondents two of the of the pressing issues were the loss of necessary skills to support mainframe applications (49%) and operate the platform itself (48%).

The survey results showed that this skills crisis is expected to have far reaching impacts, with almost two thirds of IT decision makers reporting that the loss of mainframe skills in their organization presents a big risk to the entire business.

“Our findings in last year’s survey highlighted the frustration IT leaders have with the cost and inflexibility of their mainframe applications” said Thilo Rockmann, Chairman and COO of LzLabs. “What we are seeing in this year’s is a realization that the loss of mainframe skills poses a significant threat in the coming years, and piecemeal approaches will not be enough to solve this” he continued.

The results from this survey also confirmed the growing desire to move these mission critical mainframe applications away from their existing platform in order to capitalise on the technological benefits of cloud systems, and mitigate the skills loss by tapping into the vast open-source development talent pool.

Further findings showed that 95% of IT decision makers see many advantages to moving applications off the mainframe, with the ability to leverage cloud elasticity (52%) and greater development agility (also 52%) cited as the two greatest advantages of such a move.

“The extent of the mainframe skills issue is clearly of concern; however we are encouraged to see that IT leaders are recognizing the need to take action” said Mark Cresswell, CEO of LzLabs. “These findings show that efforts to upskill existing staff, or attract new talent to legacy platforms, simply aren’t enough to solve this crisis. Now is the time for organizations to move their core applications to modern, open systems and reap the benefits” he concluded.

Independent market research firm Vanson Bourne surveyed 650 IT decision makers in organisations across the UK, USA, Canada, France and DACH regions across industry verticals such as financial services, telecoms, IT, government and public sector.  The respondents were from private and public sector organizations with at least 100 employees.