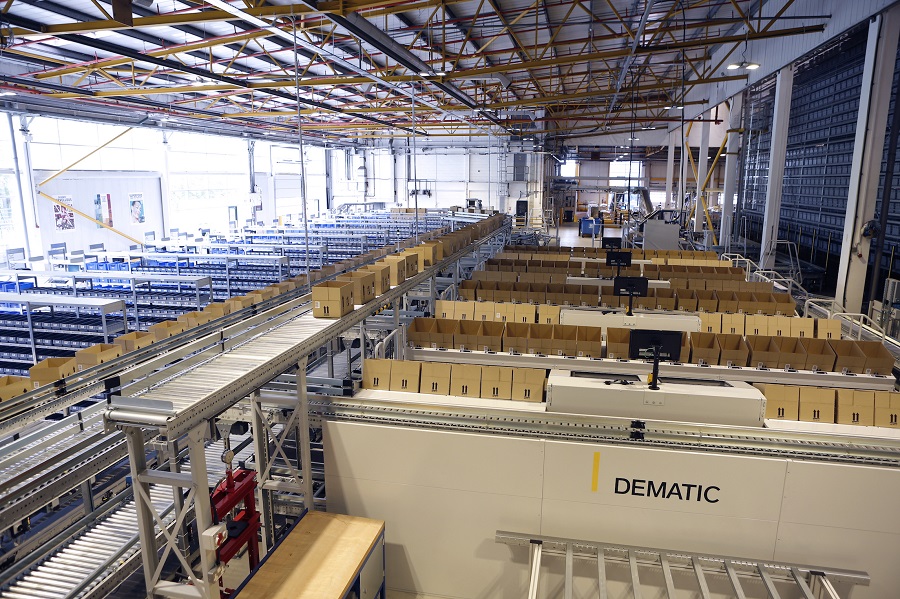 Two into one will go

well established global beauty products brand, with thousands of retail stores and a fast- expanding online customer base, was looking to gain productivity improvements and leverage competitive advantage in the UK market through streamlining and merging its fulfillment operations for both retail stores and eCommerce orders.

After a long period of assessment, the business recently embarked on its first venture into automation with the installation of Dematic Multishuttle technology and RapidPut waveless picking at its site in the UK.

The Challenge
The company had two separate distribution centres on the same campus, one handling retail demand, with peak volumes of 88,000 packs a day, and the other fulfilling eCommerce orders of 142,500 items per day. The business wanted to consolidate both operations into one building. The challenge put to Dematic was to provide an automated facility capable of processing both retail and eCommerce orders, all within an operating footprint of 4,500 sq m and critically, within tight budgetary constraints.

The Solution
The solution provided by Dematic elegantly caters for retail and eCommerce orders by combining a number of picking solutions including the use of the Dematic Multishuttle, with Goods-to-Person technology, Dematic RapidPut stations for eCommerce orders, voice command technology for order consolidation and trolley picking operations – all under the intelligent co-ordination and control of Dematic iQ software. The result is a seamless process capable of meeting the heavy demands of retail promotions and replenishment, as well as the expanding requirement for fast, efficient and accurate despatch of online orders.

However, initial concepts put forward in 2012 were considered too high-level and so attention turned to finding ways of delivering smaller scale improvements. The result was a spark of inspiration that led to the development of Dematic’s highly innovative RapidPut waveless picking solution.

The intelligent Dematic iQ software behind RapidPut considers picking and putting as part of a continuous selective flow process, creating a dynamic batching solution without the need for a picking buffer. In effect, the sophisticated software at the heart of RapidPut creates a dynamic ‘pick and put’ process – a waveless or endless batching system that removes the requirement for sortation equipment.

However, by 2015 full automation was back on the table, along with strong competitive tenders from other automation suppliers. The problem was, the initial concept put forward by the Solutions and Enhancements division of Dematic centred on using a manual trolley pick operation, which was conceived to fit the budget. As the customer was now looking for a fully automated system, all within the Capex, creative thinking was required and Dematic stepped up to the challenge.

Previous installations of RapidPut had always been fed by manually loading totes onto the system. Dematic’s design team was fully confident that the Multishuttle would cope and they were right. The Multishuttle was well able for the task.

A further challenge was how to design a solution to match the customer’s peak demand. The company has a massive Christmas peak where over a four-week period they experience a doubling of volume for retail and a fivefold increase in eCommerce orders. That would mean that an automated system designed for peak would be underutilised for 48 weeks of the year. Dematic took a different approach and designed the system for non-peak, with a manual trolley pick supporting the automation during peak periods. The concept fulfilled the objective of providing an efficient solution, all within the designated footprint and set budget.

There was also the challenge of getting the trolley pick to merge with orders from the automation side. It was complex and would require close attention by the iQ software team, but it was a challenge that the software team was well able for.

Realisation
Installation was started on 16th January 2017 and the system was handed over on schedule and to budget in July. During this time, the Project team had to work in a fully working environment, where the customer was still shipping to stores. Also, it was the first time in the UK that the global code for the Multishuttle had been deployed in a live customer system and, in addition, it was a new model of the global code.

Nearing hand-over, the Dematic Early Life team moved in to smooth the transition to the customer.

Early Life is a team effort and the collective responsibility of Dematic to ensure that any faults or issues that occur in the first few months of a project are resolved as quickly as possible. The objective is to give the customer guidance and support during that initial period where transitioning from, what is often a conventional manual operation to quite a complex automated solution, can be challenging.

In this instance, the customer had no previous experience with automation, so there was a steep learning curve in getting all involved to understand how the solution works and how to get the most out of the system.

During early autumn the retail operation was ramped up ready for the Christmas peak, with the eCommerce system scheduled to go live in January.

The Benefits
Through the clever application of intelligent systems and automated processes, the flexible and scalable solution provided by Dematic places the business in a strong competitive position to cope with future increases in demand.

All in all, faster, more efficient fulfillment has been achieved in a significantly reduced footprint.

Faced with significant challenges and constraints Dematic has used its ingenuity, design capabilities and collective problem solving capacity to deliver a highly innovative solution that fits the objective, the space and the budget. Necessity may be the mother of invention, but Dematic makes it happen.