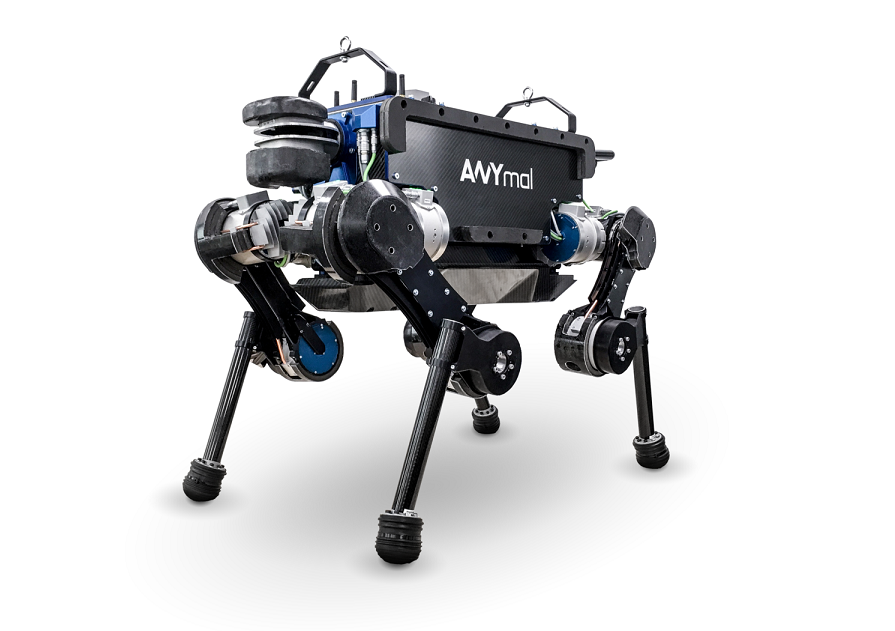 ANYbotics allows its robots to go anywhere. Named ANYmal, the four-legged machines can work in harsh environments and walk on difficult terrains. Now SAP is helping the startup and its ANYmals from Switzerland to run better.

The ANYmal robot resembles a medium-sized dog. Like its real canine counterpart, it can cross the forest floor, wade through water, and cope with fields of high grass. It even navigates safely across wobbly planks and up steps.

Walk and Jump, Duck and Tip

ANYmal can walk, trot, jump, duck, bend, and tip autonomously. The pet-like machine overcomes large obstacles, crawls through pipes, accesses buildings via steps and stairs, and has no trouble with rough snowy, windy, rainy, or even fiery surroundings.

Tasks can be repetitive, dirty, or dangerous, making the intelligent electronic dog the ideal companion for human workers. ANYmal can be used in mines, construction sites, and remote locations. It has already successfully completed advanced autonomous tasks on offshore platforms and in sewerage systems, for example. Companies using ANYmal can reduce not only operational costs, but risks to personnel and installations as well.

ANYmal can perform automatic visual and acoustic inspections. It perceives the environment through laser distance sensors (Lidar) and stereo cameras. This enables the robot to determine its position and identify steps, obstacles, and bumps. When used in industrial surroundings, a pan-tilt head with various sensors and tools, such as an optical zoom, a thermal camera, a gas detector, and artificial LED lighting, can be attached.

Whereas the capabilities of drones and wheeled robots are limited, ANYmal uses ANYdrive, a new kind of series elastic actuators (SEAs). The SEA unit is a compact, tightly integrated, and sealed actuator module containing custom-control electronics. The design of these compliant actuators is inspired by nature, where tendons and muscles work together to control force. All its joints can be rotated 360 degrees for versatile maneuvers.

ANYmal’s technology began in the legged robotics group at the Autonomous Systems Lab at ETH Zurich (Swiss Federal Institute of Technology in Zurich) and then in its Robotic Systems Lab. Nine years of research went into the development of the machine. Founded in 2016, the spin-off company ANYbotics then started to commercialize and produce the robot. The startup became a customer of SAP in 2019, when it began running its business operations on SAP Business ByDesign.

“SAP Business ByDesign allows us to integrate our processes, from purchasing and manufacturing to sales and finance, into one cloud-based tool, thereby reducing complexity and enabling us to scale our organization. In our applications, we envisage using SAP to handle large datasets collected in autonomous inspection missions and as an interface to our client’s ERP system,” says Fredrik Isler, CFO, ANYbotics.

ANYmal’s own software is built on the open-source robot operating system (ROS), allowing for quick integration in an existing framework and the re-use of available software. The mechanical animal can easily be programmed for custom projects. It can even dance and perform or work as a robotic paper and package delivery boy. After three hours of battery power, ANYmal can dock and recharge: It finds its way and connects to the docking station independently.